When is the best time to switch Georgia Gas Providers

The way to save money on your Georgia gas rates is to remember that energy prices follow a predictable yearly cycle. When demand is low and supply is high, then prices fall.

So, it??™s easy to conclude that summer would be the best time to shop and switch to a new provider. After all, that??™s when natural gas is hardly being used and production is at its highest. Right?

There??™s really more going on than most folks know. Let??™s look at how all this works so you can shop for a better deal and learn how to save on your natural gas bills for years to come.

When to shop for natural gas in Georgia

When May arrives in the southern states, summer heat increases demand for air conditioning. Because more electric power stations are using more and more natural gas to generate electricity, the demand for natural gas actually climbs throughout the summer. Everyone from Atlanta to Boston to Chicago to Denver wants to run their air conditioners. Though prices are not as high or volatile as they were before 2009, natural gas prices still fluctuate, even during the summer. Even though gas production has been at record highs during the summer, how much natural gas is used for Power Burn affects the wholesale price, especially if tropical storms shut down gas well platforms in the Gulf of Mexico or if there??™s a pipeline disruption somewhere in the U.S.

At the same time, natural gas utility companies around the country are buying to refill their stocks for the coming winter??™s heating demand.

So come mid-June and into late September, there??™s certainly a LOT of demand for natural gas. Transporting the gas through pipelines adds to the cost of the gas. In Georgia and in other states that depend entirely on pipelines to bring in natural gas, prices can increase drastically.

With all that going on, natural gas suppliers in Georgia (and throughout the U.S) tend to raise their rates (the price per therm) in the summer. Suppliers do this partly to pay down debt from buying gas on the spot market gas during the past winter to supply their customers. They also are trying to hedge against losing money on the gas supply that they are buying to sell in the coming winter. Increasing rates also helps them meet their fixed costs of doing business. 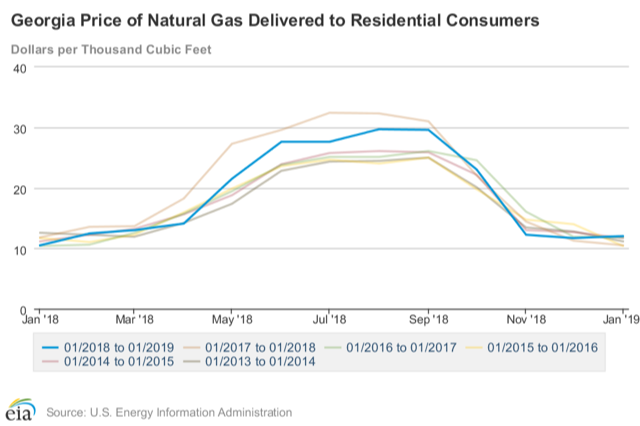 Now, it comes as no surprise that natural gas customers in Georgia usually don??™t notice the effect of this higher rate on their summer gas bills because they are using way less natural gas. Of course, in summer they are more focused on keeping cool than how much it will cost them to stay warm in the coming winter.

The problem here is that if you sign up in June for a 12 month fixed price plan at 61 cents per therm, you??™ll be paying through the nose for your heating in January.

So, the best time to shop for natural gas in Georgia is NOT during the summer.

According to EIA.gov data, residential natural gas rates in Georgia tend to remain low over the winter. However, winter rates are far more volatile than other times of the year. With every winter storm and cold snap that barrels across the country, the commodity price for natural gas will be more likely to spike when heating demand suddenly rises. As a residential customer in Georgia, if you??™re signed onto a variable rate or month-to-month plan, you could wind up paying hundreds of dollars more over the winter compared to using a fixed rate plan.

Likewise, for fixed rate plans, natural gas suppliers tend to spread out their costs by offering low-ish winter rates over several months. For the most part, while fixed rates plan prices in winter are typically lower than summer, they are not going to be the lowest prices to be found.

The best time to switch Georgia gas providers is when prices are their lowest during the Shoulder Months.

In the fall and early spring temperatures throughout the country moderate. That means twice a year, there??™s less demand for cooling or heating, Consequently, prices for both electricity and natural gas tend to dip for a period of about a little over a month from:


The shoulder months give customers shopping for natural gas in Georgia the best chance to find the lowest prices for both fixed and variable, month-to-month plans. However, just how much lower that price is varies each year. That??™s because it depends on the amount of natural gas in supply, weather, pipeline traffic, and the wholesale price. All the same, customers usually find the best rates, especially for long term plans (24 months+) during the shoulder months.

So with all of that in mind, the way to save money on natural gas rates in Georgia over the long term is to have contracts that end right when the shoulder months begin.

Most natural gas consumers in Georgia don??™t think about when their contract ends or what they??™ll do when it ends. Some will just make due with what comes and if that happens to be signing up for a 61 cents per therm rate in June, then they won??™t bat an eyelash. But by thinking more strategically and aligning their plan??™s expiration date with the yearly shoulder month cycle, customers can make it easier to find better prices and save money over the long haul.

The trick is to arrange your natural gas supplier contracts so that they expire as one of the shoulder months begins.

If your contract ends several months before the next shoulder month, then consider other plan options like short terms fixed or variable rate, month-to-month plans. While 6 month plans are more common all year long, natural gas providers do sometimes offer 3 or 4 month plan terms in the summer. Depending on the time of year, both of these kinds of plans can help a consumer time their contract expiration to the next shoulder month period.

If neither of those term lengths are available, customers have two options.

1 Sign up for a variable rate, month-to-month plan for three or four months that offers a low introductory rate. Because month-to-month plans let you switch whenever you want, you won??™t face an early cancellation fee. But, be sure to understand exactly when the introductory rate ends because you??™ll want to switch to a fixed rate plan before your rate changes. Depending on the time of year, the wholesale price, and the provider, variable rate can be painfully expensive.

2 Sign up with a fixed rate plan that has a low early cancellation fee. Then cancel the plan when you find that low rate during the shoulder month period. Beware that you want to avoid paying more to cancel the contract than you might save with a lower rate.

During this time, keep an eye on natural gas plan rates and check out the Georgia Gas Savings Blog for useful information and analysis. Once you have found a fixed rate plan that offers the lowest price with one the best natural gas supplier in Georgia, then go ahead and make the switch.

If you stick to the shopping for the best fixed rate natural gas plans only during the shoulder months you??™ll find better deals than most!