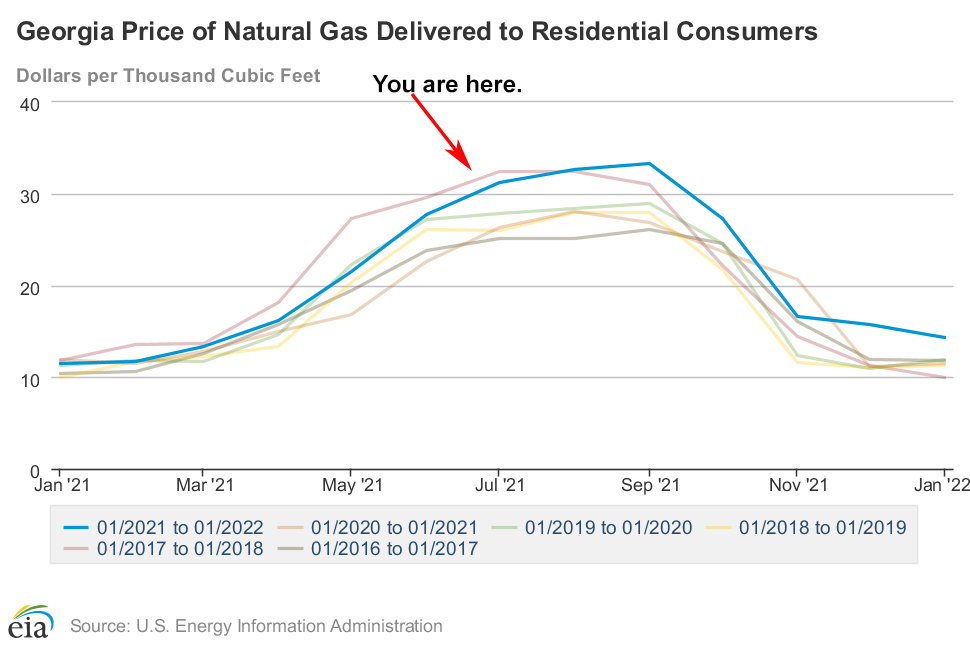 How Can I Land the Best Natural Gas Prices Over Summer?

People shopping summer gas rates might be looking at the current energy rate hikes with dismay. You need the energy, but boy do you not need these prices! Well folks, the good news is you don’t have to suffer too long. That’s because the futures market is hinting some respectable price dips in October. So your best bet is to land a decent plan to get you through the summer – and one that’ll let you jump off for cheap when September ends. And we’ve got two great options to get you there.

The simplest way to wriggle through to October is to find a fixed rate with a low early termination fee. This way you’ll get a nice dependable summer bill, and you can jump off in October without paying a premium.

The only problem? These are pretty thin on the ground! Your best (and only!) bet is the 6-Month Fixed plan from Georgia Natural Gas®. It comes with a 86.9 cents per therm rate, and a $50 exit fee. So it’s not too shabby for that October switch.

The next option is… a little more complicated. But it’ll wind up saving you more, if you’ve got the stomach for it!

This strategy is all about leveraging the two no-contract variable rate plans on the market. We know, we know! Usually you want to avoid these like the plague! But because you’re using significantly less energy over summer, those swingeing rate spikes won’t burn so badly. Plus, these plans sweeten the deal with one month on a fixed rate anyway. And the payoff? You won’t pay a cent in exit fees!

First up is the Acquisition Variable from Gas South. This comes with a 59 cent per therm intro rate for one month, and a $6.95 to $9.95 monthly charge. Secondly, you have the Introductory Variable Rate from Scana. The one-month intro rate is 69.9 cents per therm, and the monthly charge is just $5.95.

So what do we do with this info? Well, what we’ve got here are two months’ worth of fixed rate and zero exit fees. If you’re happy to jump from one to another when the intro month ends, that’ll carry you over ‘til just shy of October.

After that, it’s just a couple of weeks until those shoulder month rates are predicted to kick in. And you can hop right onto one of them without shelling out on exit fees!

So whilst it might seem like summer rates have reached boiling point, never fear Atlanta shoppers! Sure, whatever rate you lock in now is going to give you the sweats. But if you make sure you land a plan with a low exit fee – or none at all! – you’ll have the freedom to shop a cooler deal if one comes along in October. So now you know how to shop summer rates, put it into action at www.georgiagassavings.com!